Beavan Flanagan’s Grillo at Northern New Music Encounter + Commission as part of Feeding Music – Music for EXPO 2015 Competition in Milan
In addition to participating in daily roundtable discussions and leading a workshop, Beavan Flanagan will have his violin solo Grillo premiered by Mira Benjamin on the 7th of August at nu:nord‘s annual Northern New Music Encounter — a collaborative workshop hosted each year by members from one of their participating countries. This year’s festival location is Oslo, Norway. Incoming PhD candidate Mira Benjamin is co-founder and organizer of the event. Mira will also be presenting a second performance of Grillo on the 17th of August in London at LimeWharf.

Beavan has been chosen as one of 50 finalists of the ‘Feeding Music’ competition associated with EXPO Milan 2015 and will write a work for the Divertimento Ensemble to be premiered inside the Italian Pavilion of EXPO Milan. more info

Chie Tsang Lee was recently selected as one of six finalists for the Young Rapee Sagarik Competition Prize at the Tenth Annual Thailand International Composition Festival 2014. His piece, ‘Interfusion IV-Variegation of Colour’斑驳的色彩, for viola solo was premiered at the finalist concert on June 28th at the Mahidol University College of Music, performed by Leah Gastler, and explores the correlation between Chinese calligraphic materials and musical gestures.

Chikako Morishita – New Collaborations, Estonian Premiere and CDs
Chikako Morishita together with Two New Duo starts a new project ‘Multiple Sounds and Matter’. Two New Duo is a Basel based duo by Ellen Fallowfield, a rising cellist/researcher known as the builder of Cello Map—a practical resource exploring a physical plan for producing sounds on the instrument—and Stephen Menotti who appeared at CeReNeM workshop series in 2011 as the Hübner/Menotti/Hynes trio and showed intense performances. The collaboration seeks connections and contrasts between multiple sounds: multiphonic, complex and multi-layered sounds, and matter: a focusing in on the substance and the essence of a single sound at its most basic level. The three will work in workshop phases over the summer and the resulting piece will be presented in Two New Duo’s concert program throughout Europe in the 2014/15 season.

Morishita’s new work The Silence for alto flute, bass flute and orchestra was premiered by Vanemuise Symphony Orchestra with the soloists Maarika Jarvi and Monika Mattiesen on 6 June in Tartu, Estonia, as part of the 13th Estonian Composers Festival. The festival concerts were broadcast on Eesti Raadio with artists’ interviews including Morishita’s on Eesti Televisioon.

Morishita has been selected as one of four participants for the workshop with Martin Iddon and Distractfold at Darmstadt Summer Course 2014. Her new piece for e-guitar and string trio will be developed in close collaboration with the ensemble under the guidance of Iddon, and performed during the summer course.

–House of the sleeping beauties for five musicians, premiered by ICARUS ensemble at hcmf// 2012 from HCR

–tokage for 13-koto given a world premier by Nobutaka Yoshizawa at hcmf// shorts 2011 from Enrou Records.

Alumnus Tamara Friebel Awarded Postdoctoral Position
Dr.  Tamara Friebel (PhD, 2013) has been awarded a postdoctoral position at the University of Graz. The project involves an interdisciplinary  collaboration with mathematicians Prof. Dr. Karin Baur, Prof. Dr. Gerhard Eckel and Prof. Dr. Klemens Fellner analyszing and developing new uses of mathematical structures in music and architecture. The project is funded as ‘unconventional research’ of the Karl-Franzens-University Graz for three years with a grant of €180,000. 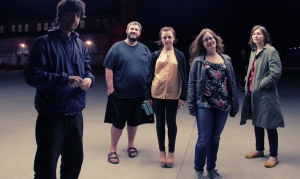 Rodrigo Constanzo has recently been awarded a commission from Jazz North to complete a dynamic score software system for composing for improvisers. The first performance of the system will be on the 18th of September in Manchester at The Noise Upstairs, and will feature : Richard Craig, Linda Jankowska, Anton Hunter, Sam Andreae, and Constanzo. More information about the dfscore system can be found here.

In addition to his commission, Constanzo will be performing with Distractfold Ensemble in August as one of the ensembles in residency at the 47th International Summer Course for New Music hosted in Darmstadt, Germany.

Daniel Portelli’s Mapping Australia + Undulations
Daniel Portelli’s piano work Mapping Australia (2014) for piano, electronics and video score was accepted to be performed at Soundstream: Adelaide New Music Festival. The work will also be part of the event “Playing with Fire” at the Music Now Symposium performed by the Australian pianist Tamara Anna Cislowska on the 30th of August at Performance Space, Kingswood Campus, University of Western Sydney. Daniel is also the Australian representative at the Asian Composers League Young Composer Competition at the 32nd Asian Composers League Conference and Festival, 2-7 November, 2014 in Tokyo, Japan with the performance of his piece Undulations for two soprano saxophones.

Michael Baldwin collaborates with les trombones de bâle
After an initial workshopping session in April with Basel-based trombone quintet, les trombones de bâle, Michael Baldwin returned to Basel, Switzerland in June for the premier of his piece, this is about much more than hearing. les trombones be bâle (comprised of Kevin Austin, Stephen Menotti, Jon Roskilly, Mike Svoboda and Juna Winston) performed Baldwin’s piece alongside composers William Doughtery, Jon Roskilly and Vinko Globokar on June 19th at various venues throughout Basel. The ensemble will be presenting pieces by the same composers on the 12th of August at an OpenSpace showcase at the Lichtenberg Schule in Darmstadt, Germany. Between pieces, Michel Roth and Mike Svoboda will be demonstrating the mechanisms of lip-multiphonics on the trombone.

this is about much more than hearing: